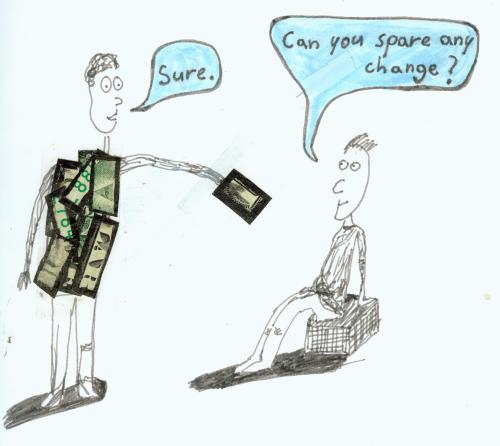 Three Jews and one agnostic went hiking on Christmas, and came back and were having Chinese food, when a lady came up to our table.

Lady: Can you donate for the victims of the Typhoon in the Philippines?

After Carl gave her money and she left, we started philosophizing on the pros and cons of donating to this lady who so rudely interrupted our Jew Christmas dinner.

Then Carl said: Even if she is going to just use the money for herself, that’s fine. I just think, I won’t get a beer the next time I’m at a bar.

And I said: You’re right. Even if I gave money to every single person who asked, that would come out to what, $20 bucks a month?

For the past few years, I’ve been pretty stingy with giving money to people I didn’t know. You know, the standard thoughts: I don’t know what they will be using the money for, I won’t end homelessness by giving a dollar, I’d rather donate to a real, organized charity… But in the end of the day, I feel stingy despite my justifications. It’s like the quote from the Dalai Lama: Be kind whenever possible. It is always possible.

The next day, I was walking down a street and went into a clothing shop and saw absolutely the best sweater ever. The way I judge any clothing is softness, and this sweater was super soft. Like the softest sweater in the entire world, probably. I really wanted to buy it. But then I thought of the dinner last night. If I didn’t buy the sweater, I’d feel free to give people change here and there. So I constructed a mental sweater out of the $40 I would have spent on this sweater, and every person who asked me for money that day, I gave.

So yes, I’m not solving homelessness and this is largely for the mental benefit of myself, but that’s good too. It is building the habit of giving. Maybe one day, I’ll be able to give even more. Come to think of it, my current sweater is good enough. I kind of like it.

P.S. A dollar was injured in the making of this comic.